A Decade Milestone For All Working People!

10 years in the Fight for $15 and a Union: already a lasting impact. 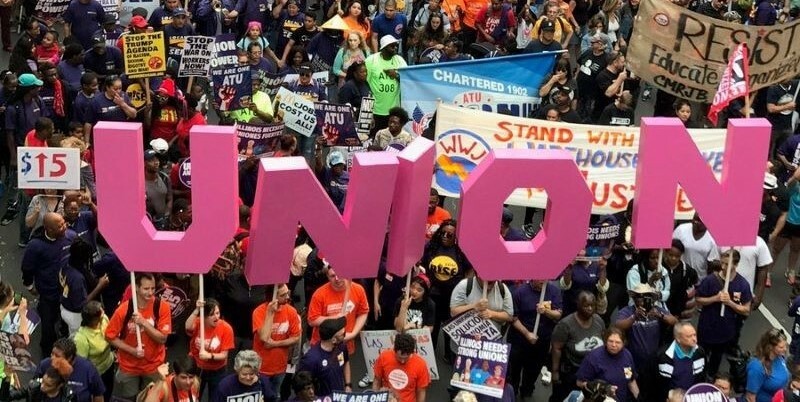 November 29, 2022 marked 10 years from the time 200 fast-food workers in New York City led strikes that launched the Fight for $15 and a Union — the most powerful workers’ movement in decades!

No one thought we could win. But they were wrong. We've been organizing, building worker power, and winning justice ever since. Be a part of history. Pledge to support Unions For All and celebrate these hard-fought victories that are bettering lives for now and generations to come:

Raises for Low-Wage Workers Nationwide
Over the past 10 years, workers have secured $150 billion in raises for more than 26 million low-wage workers! 43% of low-wage workers are now on the path toward $15 or higher with major corporations like Amazon, Disney, Target and Costco reacting to workers' demands for higher wages.

And, although $15 is just the baseline, many of us are still fighting for that wage, which is why our fight goes way beyond higher wages. We need a seat at the table to ensure more than just a one-time increase.

Pioneering New Paths to Secure a Voice on the Job
Workers in California and the South are paving uncharted avenues to ensure we have a seat at the table and a voice on the job.

In California, workers won a first-of-its-kind, historic Fast Food Council where workers and worker representatives will sit down with franchisees, corporate, and government representatives to create safer working conditions and better pay.

In the South, the region in the U.S. with the lowest wages, the fewest worker protections, and the lowest rate of union density, workers recently launched the Union of Southern Service Workers—joining together a diverse group of fast-food, retail, warehouse and home health workers to organize to stand up to greedy corporations and get what's rightfully ours: a voice on the job and an opportunity to make change.

Holding Corporations Accountable
Black and brown workers have connected the fights for racial and economic justice, successfully confronting mega corporations like McDonald's, leading to pay raises at corporate stores. Workers must have a say in pioneering real and effective solutions to these deeply rooted and systemic issues that exist across the entire industry. That's why we're fighting hard for a union where workers have a key role in protecting, respecting and sustaining all fast-food workers, no matter where we work.

Brave worker-survivors have also shined a light on sexual harassment in the service industry, filing more than 20 lawsuits against McDonald's alone, successfully pressuring the company to integrate mandatory sexual harassment trainings at their stores. That's a big deal. We're lifting our voices and making concrete change.

Join Us for the Next 10!  We're Winning Justice.