When I Fought Back Against Popeyes, Workers in Hundreds of Stores Won

Many fast-food chains must inform their workers that they're allowed to talk about union rights and their working conditions. 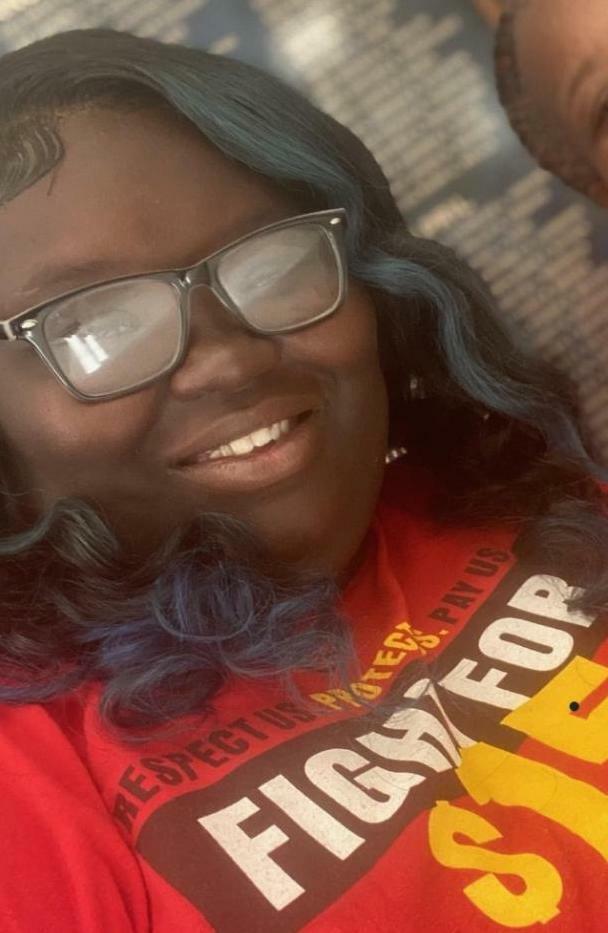 Hi, my name is Tia’Yonna Pringle. I’m a fast-food worker and a leader in the Fight for $15 and a Union. I joined this movement five years ago because like many other workers I was frustrated with the low wages and the little protections we received.

During the pandemic, I was working at a Popeyes in Tampa, FL making $10 per hour. On May 19, 2021, I decided to use my voice and join the strike to demand better working conditions.

Shortly after going on strike, Popeyes fired me. I was devastated and hurt. I considered myself close friends with the manager. I didn’t think standing up to protect myself in the workplace would come to this.

My son was five years old at that time, and I worried how we would get through this. I had bills to pay: rent, lights, phone, childcare. Everything was spinning out of control and we eventually got evicted. We moved in with my mom, and it took me almost five months to find another job.

What got me through all that was knowing that when workers strike together, we have power! I knew it was illegal for Popeyes or any other employer to discriminate or retaliate against workers for exercising our rights.

Yes: workers have the right to go on strike, and to talk about wages and working conditions.

With the help of Fight for $15 and a Union, I quickly filed an Unfair Labor Practice charge against the Popeyes store in Tampa, as well as against Sunholdings Inc, which manages over 1,200 other fast-food and retail stores in 12 states.

It was a long process, but after more than a year of fighting, I received news that the National Labor Relations Board (NLRB) was able to resolve my case. Popeyes would have to:

- Reinstate me to my job;
- Pay my lost wages; and (get especially ready for the next one…)
- Require 100 Popeyes stores and over 500 other stores, including Arby's, Burger King, and Cici's Pizza locations, to change their rules so employees know they're able to talk about their union rights!!
- Require these stores to post a notice so all employees can read about their rights.

This was huge! I felt like my case would make a difference in so many workers' lives.

I’m proud that I took action and held Popeyes accountable. My story is just one of the many examples of why workers in every industry must have a strong and protected voice at work. Without that, it's very difficult to hold companies accountable … and thus make real change.

If there’s any advice I can leave with workers, it's this: Don’t be afraid to use your voice to create change in your workplace and community!