Winning a safer workplace through our union

When 38-year-old Amy Banelis joined the human services agency Triangle, Inc. in Malden, Massachusetts in 2015—working with people with disabilities (developmental, mental, physical) to teach career readiness, help them find jobs, and support them in their employment—she quickly found she and her 100+ co-workers sorely lacked their own job training and support. “I didn’t know how to de-escalate situations,” she explains. “My co-workers struggled with that too. It felt chaotic. We weren’t in a safe space.” 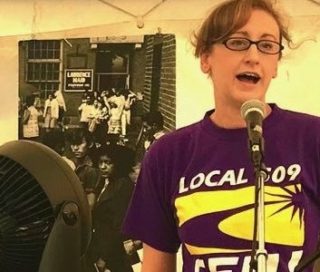 Despite meeting co-workers that first week who were “very transparent” about their unsafe working conditions, as well as the agency’s high turnover rate that—along with poverty wages and lack of job security—resulted in understaffing, Amy realized they didn’t have a voice at work.

Having been raised in a union household, she knew what coming together in a union could mean for them and their vulnerable clients, like her aunt with Down Syndrome who had been part of Triangle’s day program for 30 years. 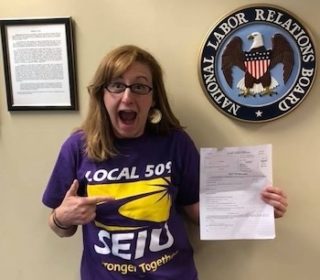 So she started organizing. It took four hard years to win a union with SEIU Local 509, but when the votes were cast by mail in August 2018 (counted by the National Labor Relations Board), 60 of the 62 votes were for joining together in a union!

The path to winning their union had been tough. “We were on a roll. It was amazing. Then four of us got fired on the same day, illegally for union activity. It worked for a bit, people were terrified, but we continued to organize, to meet with people. ...And, after many months of fighting like hell, I won my job back. The culture changed a little bit. People realized they’re not going to mess with Amy now.”

This incidentally made an impression on Amy’s 11-year-old daughter Ashley. When Amy was asked by Local 509 to travel to Los Angeles this past October to introduce her senator, presidential candidate Elizabeth Warren, on stage at SEIU’s Unions For All Summit, Ashley told her (single) mother, “You need to go. You can Facetime me. You can’t miss this. You have to be badass for the union and go.” 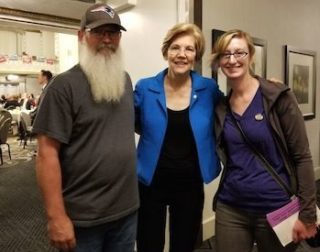 By coming together in a union, Amy and her co-workers won a union contract, trainings on how to de-escalate, how to restrain people in emergencies, what to do in cases of sexual harassment and assault and how to give CPR.

Hourly pay increased from $12 to $14, annual raises went into effect, and additional sick days were added. “For me directly,” Amy says, “the pay increase was helpful. Rent is over 50 percent of my take home pay.”

Most importantly, Amy says, “We now have a vehicle to address problems. They can’t scare people off for voicing safety issues, staffing issues. People were shut down, not listened to.” With regard to that vehicle, she and her co-workers also won a union orientation, a 30-minute training for all new staff that Amy holds monthly.

“Forming our union made us feel powerful, and I want every working person to experience that power,” she says. When we join together in our unions, we have a REAL voice at work.